Ever since being introduced to green tea Kit Kats freshman year at Penn, I feel like I’ve been enlightened to a whole other world where the chocolate is not just white, milk, and dark, but banana, cherry blossom, and even European cheese. In fact, Nestle has been cranking out wacky Kit Kat flavors like these since 2000 and to date have produced over 200 different flavors. However, like all well sought-after treats, the various flavors are usually limited in distribution both temporally and geographically with special limited edition flavors being sold exclusively at designated prefectures of Japan. Thus, Felicia and I were super excited two years ago when our friend Seika brought back some sakura green tea Kit Kats for us to try. This summer, another one of our friends Anita traveled to Japan to take classes and so when skype-ing, I couldn’t help but ask for one sweet favor– bring back all the Kit Kats! She ended up bringing back 5 different packs of Kit Kats for Felicia and I and although we were eager to try them right then and there, like all good food, we thought it’d be more fun and interesting to share them as an experience amongst friends later.

Fast forward a few weeks and here Felicia and I are back in our dorms at Penn. With classes about to start in the next couple of days, some of our close friends have arrived back to campus now too. But just giving the kit kats to our friends Amy, Dee, Jackie, and Katrina to try seemed a little too straightforward, a little too easy. Curious to see how accurate the flavors were, we instead decided to have them guess the flavors and in effect put them to their first test of the school year. 😛 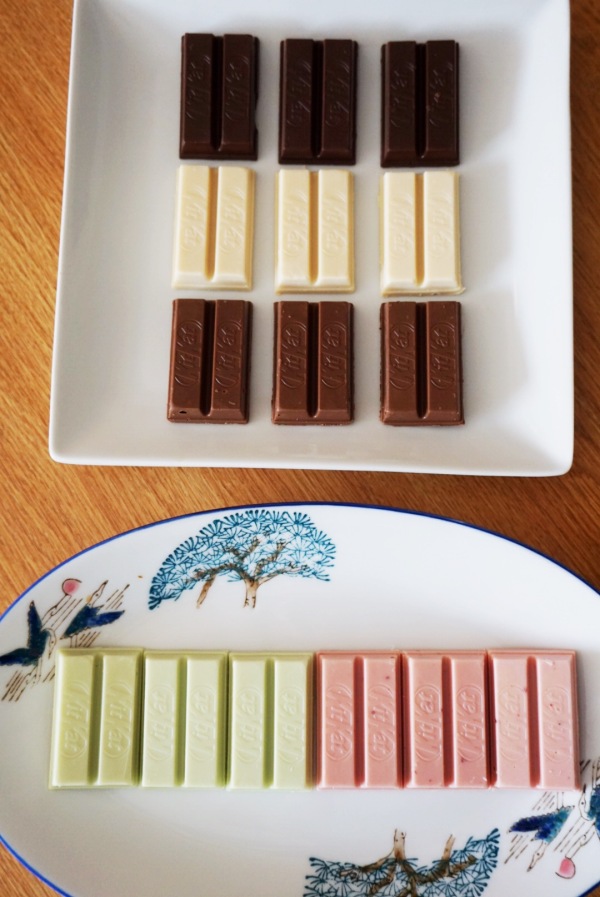 Here were the results!

Right off the bat, I could tell we were in for some laughs. Since I already knew all the flavors ahead of time, this flavor seemed surprisingly spot-on to me. But given the rather wide range of descriptions and flavor guesses, it’s interesting to see how drastically differently one thing can taste if given no flavor profile to reference. I really liked this flavor and found it had an especially strong red bean after taste, while Felicia also noted hints of plum amongst the milk chocolate.

Katrina was the closest on this one. The rum flavor was very prominent, but as noted by Jackie and Dee it had plenty of sweetness to cut out any unpleasant alcohol taste. Felicia described this one as “sweet, almost floraly.”

This one was my second to least favorite as the orange flavor just seemed too artificial. However in its defense, the artificial orange liqueur-like taste did stand more accurately by its “orange cocktail” flavor designation. I guess being a Floridian, I simply prefer my oranges fresh.

While the first three we tried took on the colors of milk, white, and dark chocolate, respectively, the last two flavors were colored light green and pink, respectively, which likely played into Katrina and Amy’s flavor guesses for this one. This one was actually my least favorite. Echoing the words of Jackie and Dee, Felicia and I also thought it tasted soapy/detergenty. However once again in its defense, prior to experiencing it in kit kat form, none of had ever even heard of ume let alone tasted the real thing before. Then again, any fruit (ume is a Japanese plum) shouldn’t taste soapy…

This one was the crowd favorite, which only further validates why strawberry along with green tea are the two most popular flavors in Japan to date. The strawberry flavor was just right, but none of us noticed even the slightest hint of maple. Still a good one to end on though!

All in all, for me, one general takeaway is that not all Kit Kats are created equal. There were definitely some flavors significantly better than others, but in the end they summed up for a memorable way to catch up over a long summer of events. With senior year just around the corner for all six of us, perhaps it was only fitting that we took a break and had some Kit Kats. After all, with a slogan that resonates well with senior year and a name that (luckily for Nestle) sounds similar to the Japanese good luck phrase “Kitto Katsu,” Kit Kats turned out to be the perfect way to kick off our final chapters at Penn.