The last day of our mini family reunion in Canada was spent in the nation’s capital, Ottawa. We arrived in the city at noon and headed first for Parliament, snagging the earliest free guided tour tickets left for 3:50pm. 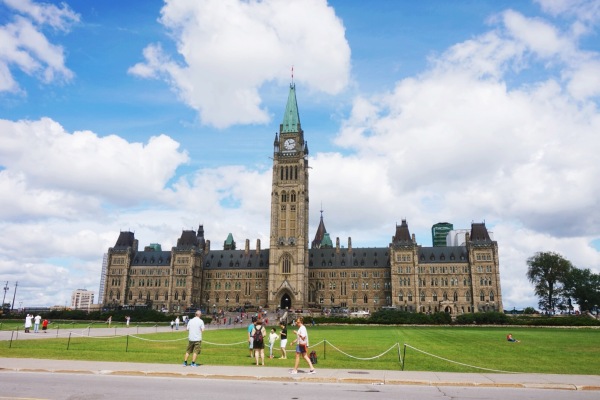 Till then, we headed east on Wellington Street across the Rideau Canal, a UNESCO World Heritage Site prized for being the “best-preserved example of a slackwater canal in North America.” Built in the early 19th century, the canal is still operational today. 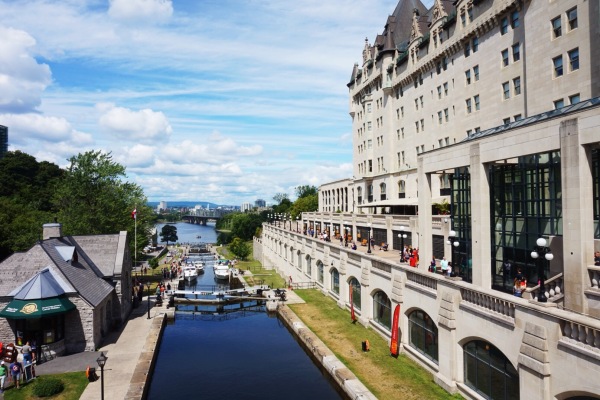 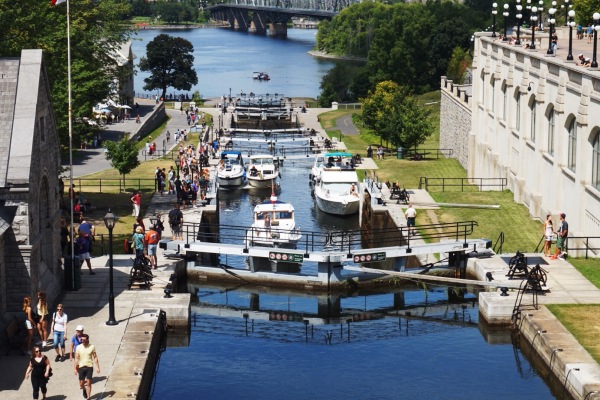 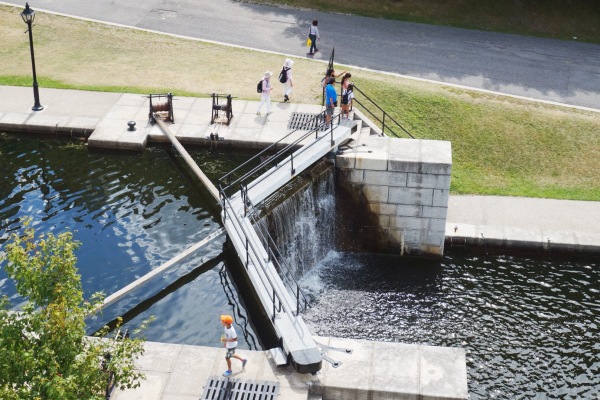 Alongside the canal stands the Fairmont Château Laurier Hotel, which being only a stone’s throw away from Parliament Hill, has housed its fair share of famous politicians, Winston Churchill and former U.S. President Herbert Hoover to name a few. 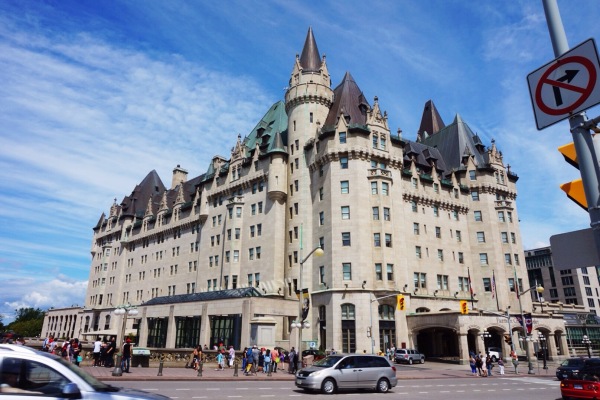 Hungry for lunch, our stomachs led us next to Byward Market, an open-air agglomeration of food and craft stalls, restaurants, and shops. Here our cousin recounted eating gooseberries together during Crystal and I’s first trip to China, and so for the nostalgia factor, we bought a little basket’s worth at one of the stalls to snack on for later. 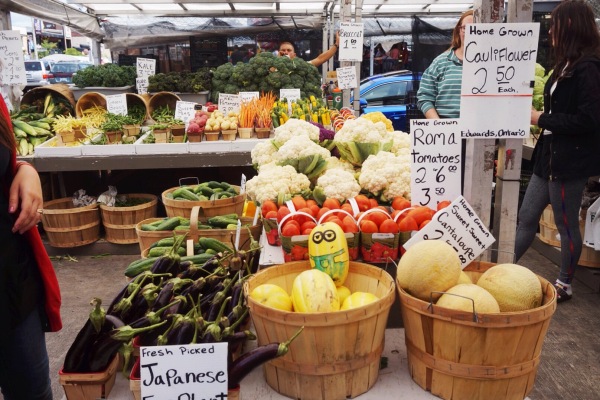 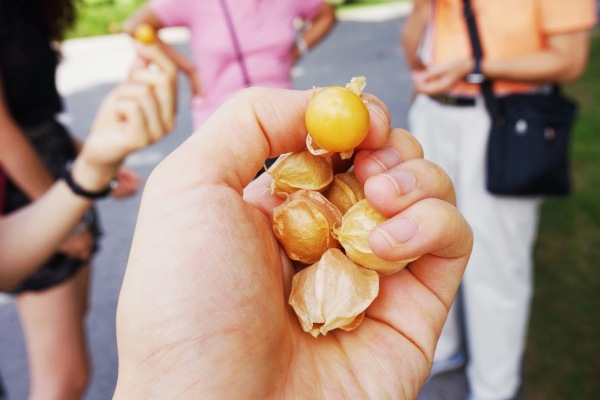 For a full meal, we sat down and ate at Moulin De Provence. President Obama visited this bakery-cafe during his 2009 trip to Ottawa and bought a cookie. It’s safe to say they’ve really capitalized on that transaction since. 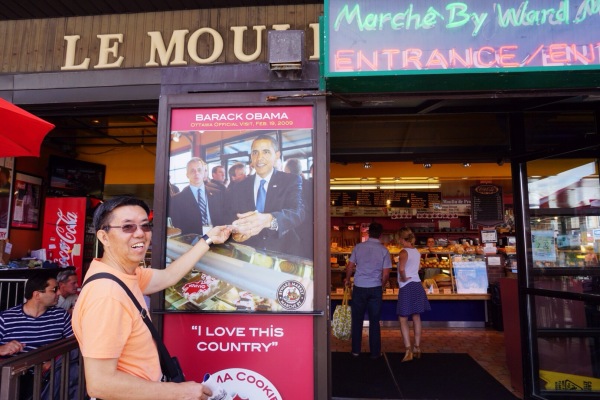 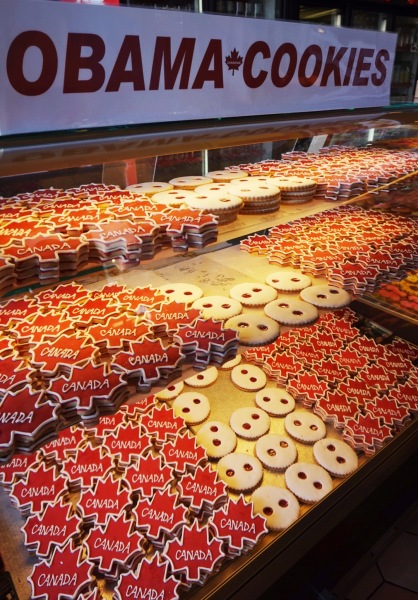 After eating the cookie form, we also discovered the maple leaf in art form during our post-meal loop through the market. The artist explained to us how a special chemical treatment allowed him to etch designs onto the leaf. Our cousin purchased this one of Parliament to hang in her home!

There were quite a few street performers at the market, but unlike the usual street-performing demographic, most of them were young adults. The mix included a couple opera singers, a free-style dancer, and a woman in traditional Japanese clothing playing a traditional Japanese instrument. Most fascinating to me, however, was this young man playing what appeared to be an Aboriginal instrument. 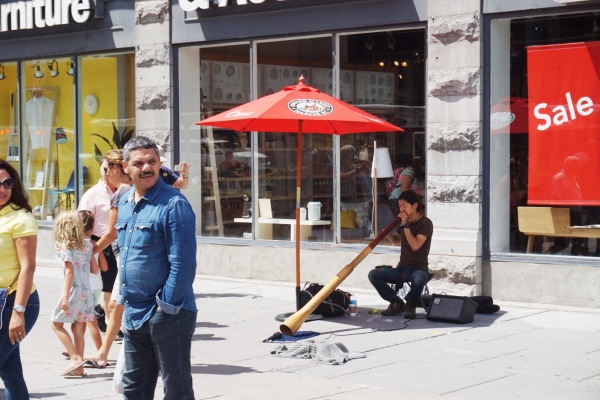 Within easy walking distance, we also dropped by the National Gallery of Canada… 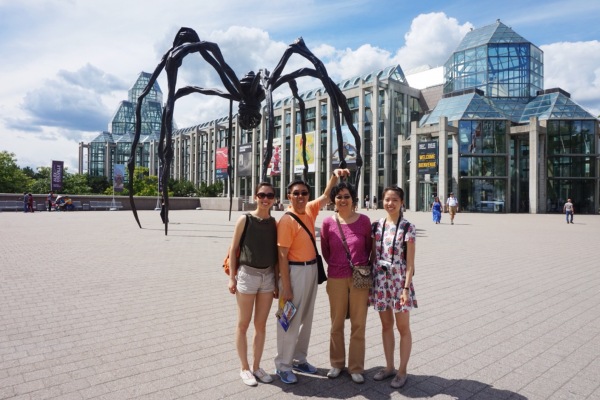 and Nepean Point. At the latter, we crossed paths with a wedding party wrapping up their shoot. And yes, that’s a drone! 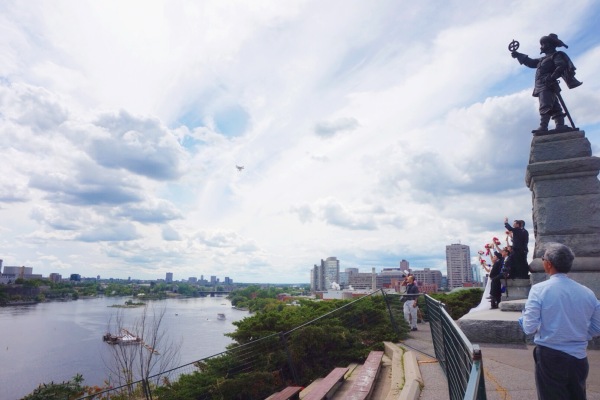 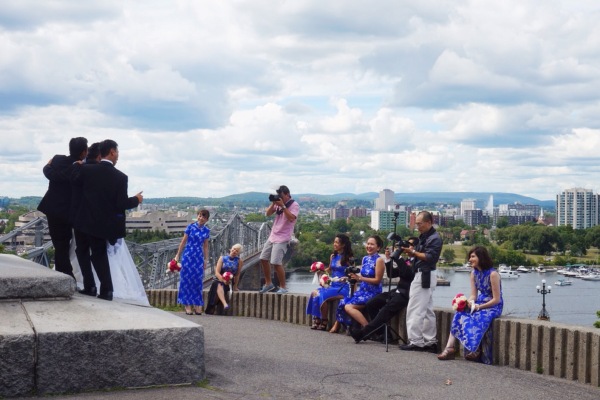 The view at Nepean point was really quite nice so good thing we snapped a few photos for ourselves, too! 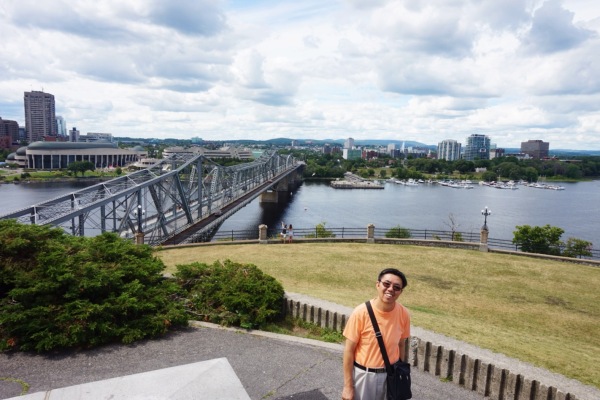 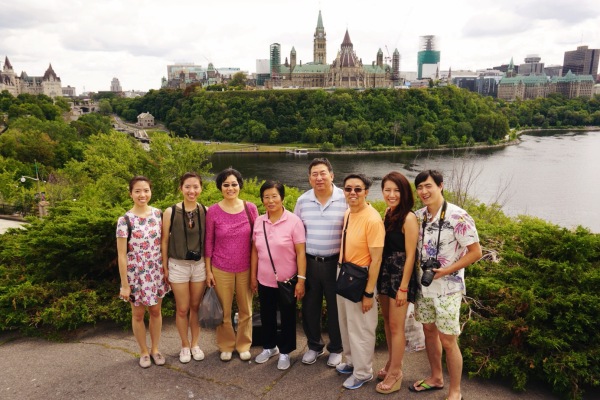 Walking along the water and over the canal, we once again returned to Parliament Hill for our guided tour. 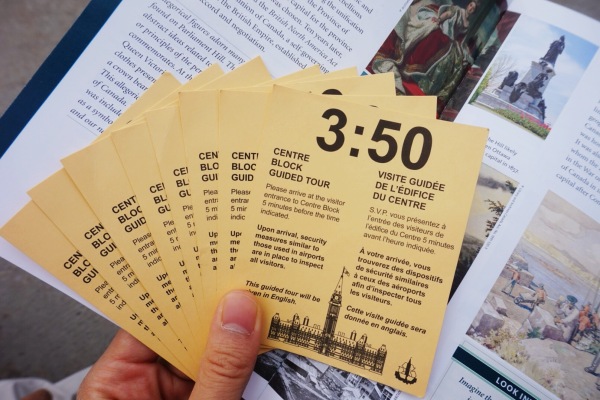 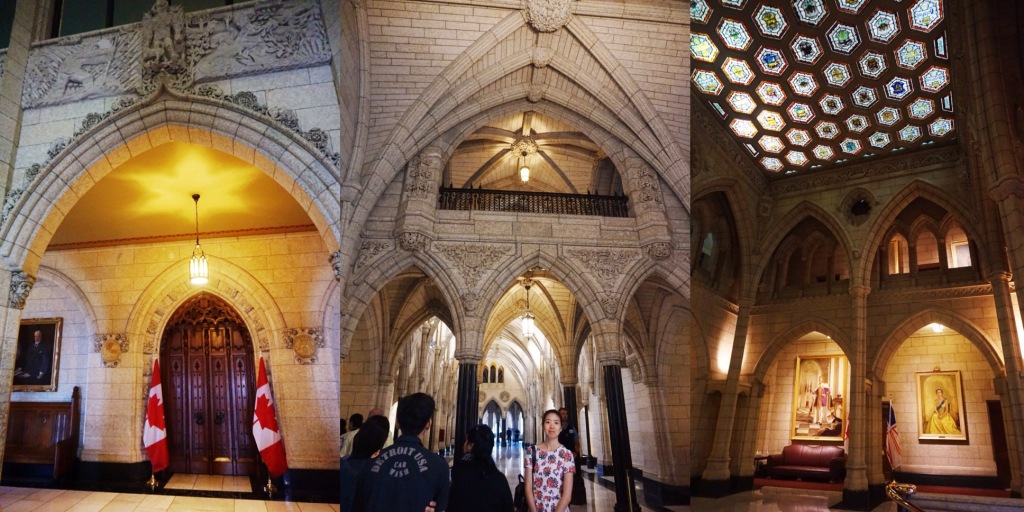 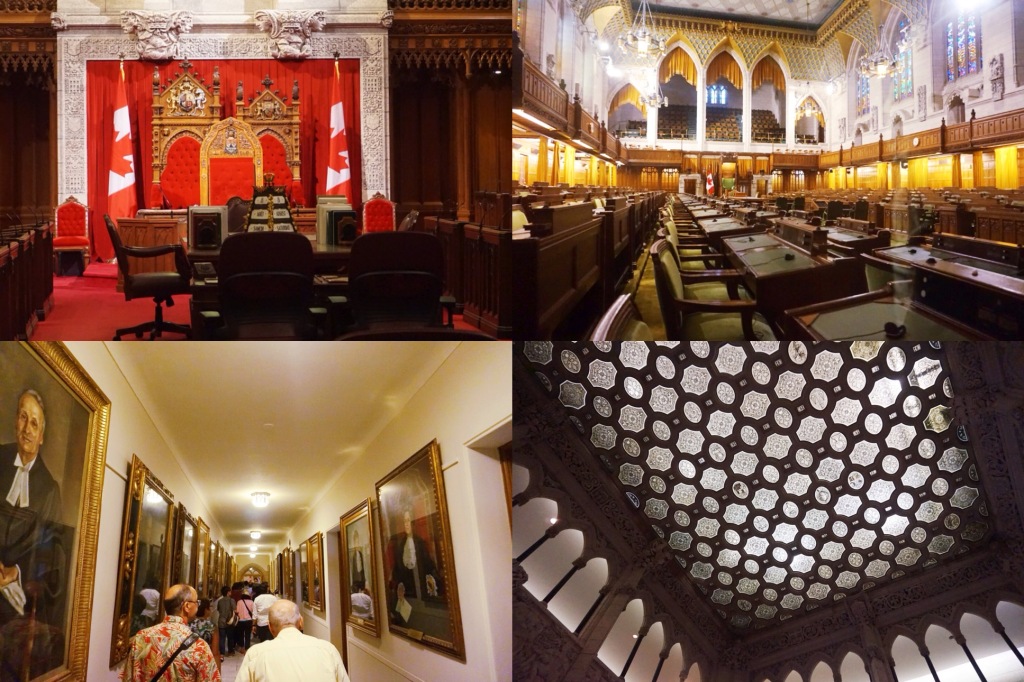 After exiting the Parliament building, we passed by this spunky fella… 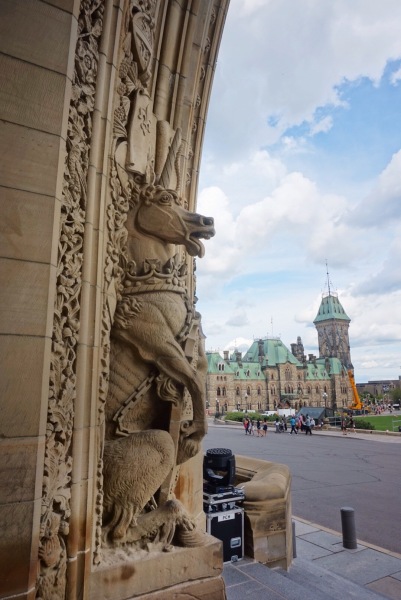 and the Centennial Flame. 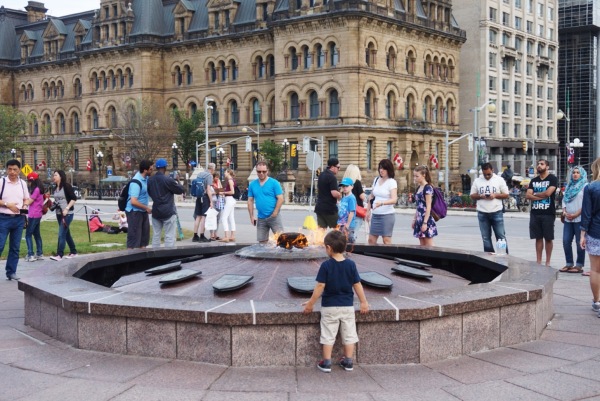 Being that it was our last day together, for dinner we had super legit Chinese food at 四海一佳. From the service and lazy Susan to being all together eating family-style in a private room (with cold watermelon to end the meal!), I felt like I had been transported back to China. 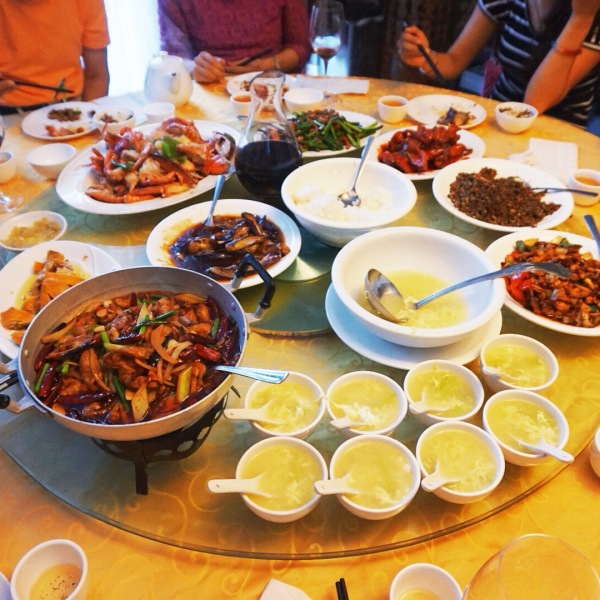 We split ways with our relatives after dinner, but for Crystal and I, we still had one more event on our agenda, which required going back to Parliament Hill! Since dinner had lasted a good while, we were in a bit of a time crunch to catch the 9:45pm Northern Lights show, but made it just in the nick of time! The final fireworks of the Casino du Lac-Leamy’s Sound of Light show were just going off when we arrived. 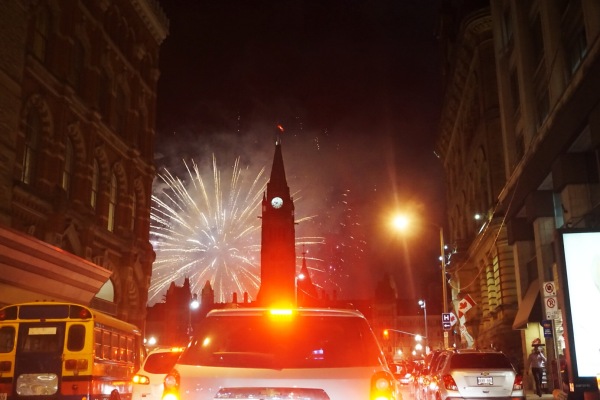 After the last boom and burst of light, the Parliament building was then transformed to a canvas on which we were mesmerized by illuminations and stories of Canada’s history. 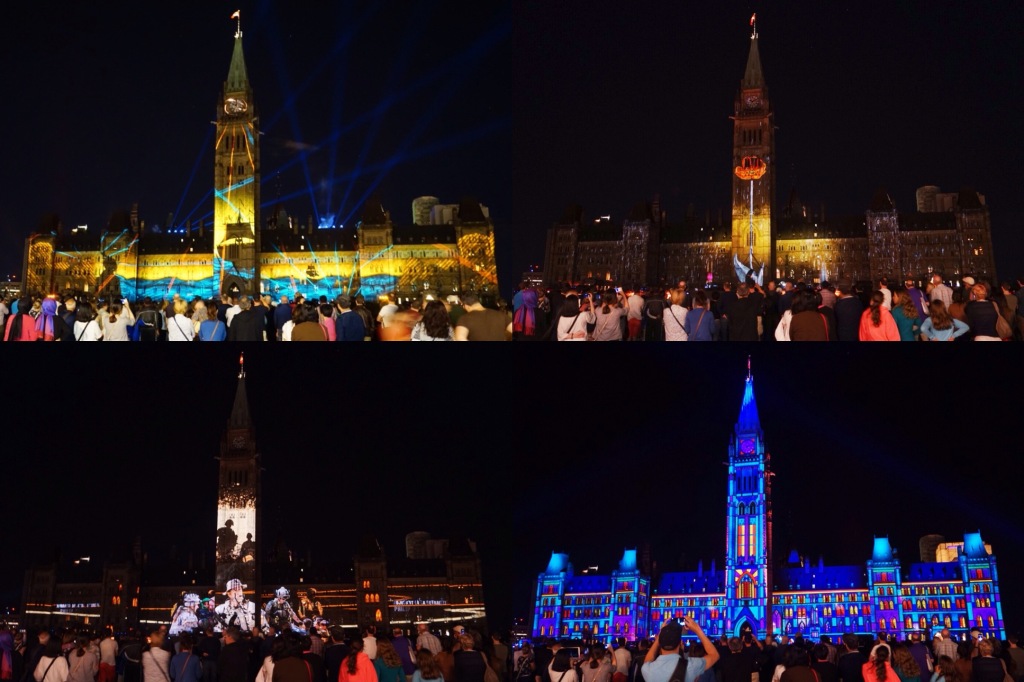 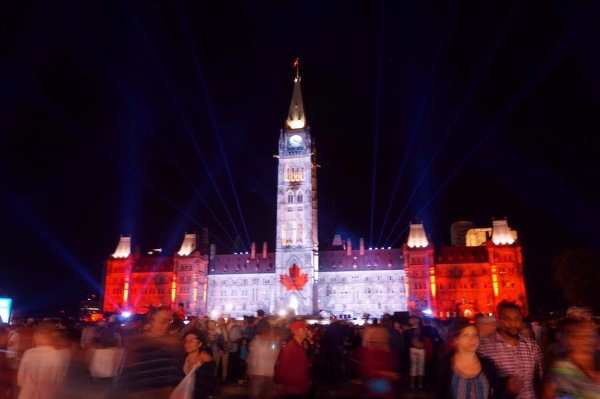 It was a spectacular conclusion to our Canadian adventure.

7 thoughts on “Onwards to Ottawa”