For the third day in a row, our Antoni Gaudí treasure hunt continued as we visited two more of the Catalan architect’s masterpieces, Park Guell and La Pedrera. Park Guell was envisioned as a residential community for Barcelona’s upper class, but the project ultimately was unsuccessful. Today it is mainly a tourist attraction, but the unticketed sections of the park are also used by locals. It was in one of these sections that we came across a man of many years playing the guitar. And wow did he pick the perfect place. With brilliant acoustics, the music floated blissfully through the breezy walkway, a respite from the harsh sun, and at 10 €, I was compelled to buy his CD. The man spoke English and eagerly explained to me the selection of songs he had recorded on the CD, some alone and some with friends. Now when I listen to these songs at home, I am reminded of my time in Barcelona and whisked away to that enchanting morning in the Park. 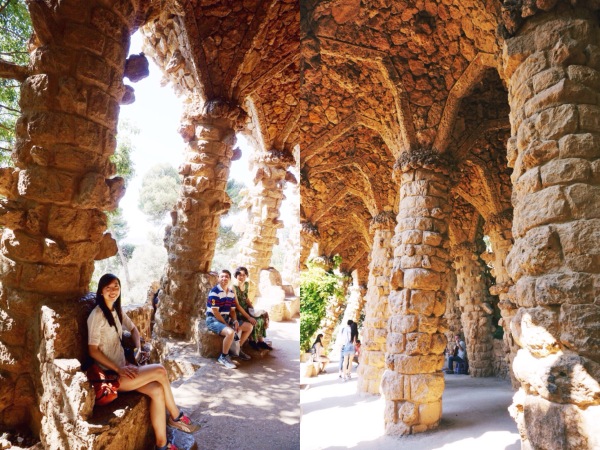 Traveling by bus, we next visited La Pedrera. Despite being on the same block as our hotel (we had a great view of its iconic rooftop from our room!), we waited until now to finally visit. The weirdly organic rooftop was definitely my favorite part of the apartment building, but the attic level below which was converted into a museum of sorts was delightfully informative. The displays gave insight into Gaudí’s design process and a video demonstrated how thoughtfully each piece of furniture and even the door handles throughout the apartment were designed to fit the contours of one’s body and hand, respectively. 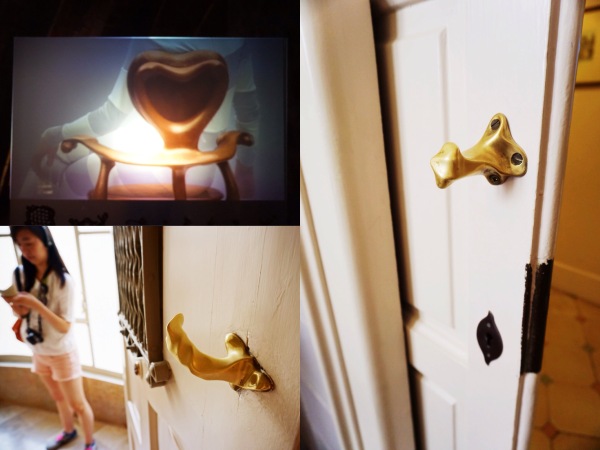 On the next floor down, we got to see what the inside of one of the apartments looked like. The original flooring in one of the rooms was still intact, and I learned from my audio guide that its design was actually used on the sidewalks of the Passeig de Gràcia to honor Gaudí. I had walked along these sidewalks many times in the previous days and made sure to look out for this design the next time. 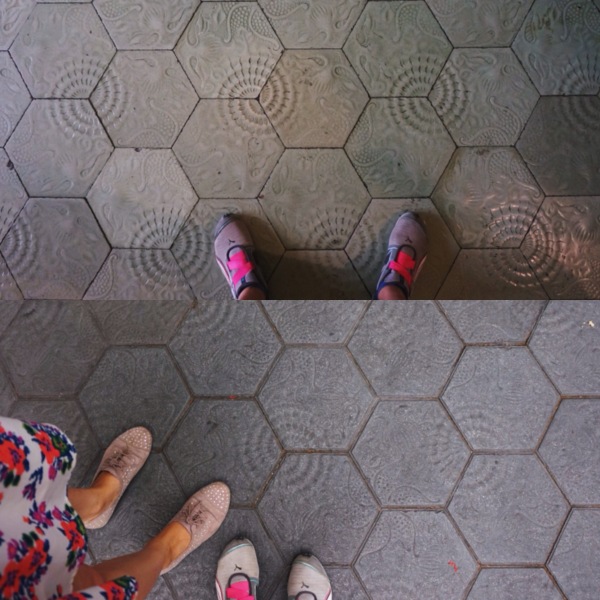 It was well past our normal lunch time at this point, but instead of grabbing something quick, we decided on a sit-down tapas restaurant that we had fortuitously spotted on Instagram just minutes before. Turns out this restaurant was also one of our friend’s favorites in Barcelona, and by the look of how busy it was, it seemed like this place was a lot of people’s favorites. Ordering a pitcher of sangria, side of tomato-rubbed bread, plates of chicken paella and tuna salad, platter of tapas, and duo of desserts (one being crema catalana), we went for all the Spanish classics. 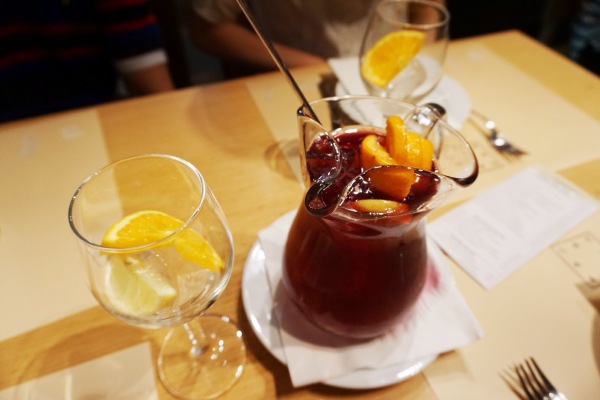 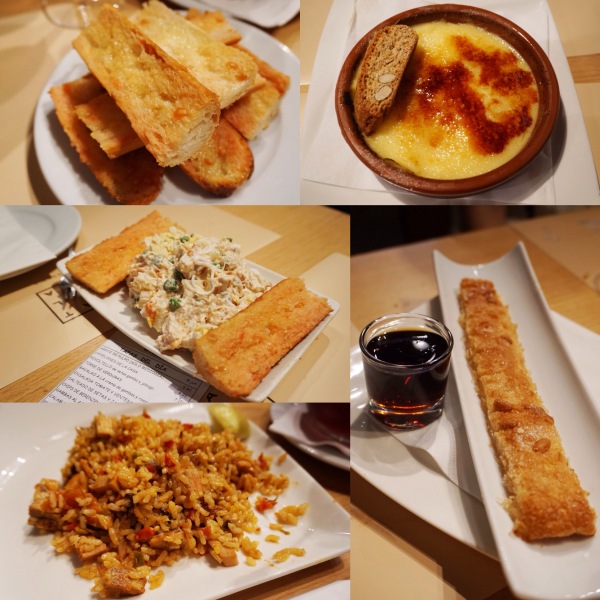 Having seen all that was on our agenda at this point, we spent this last afternoon in Barcelona revisiting La Rambla where our journey began. We had only ever happened upon small family-owned grocery stores throughout our trip and so when we passed by a two-story supermarket, thought it would be interesting to look around. Crystal finally found her much sought-after sherry vinegar here, and we also bought two types of turrón to try. For our meat-loving brother, we bought an assorted pack of chorizo and two packs of jamón for comparison, one priced at 25 €/kg and the other a mighty 90 €/kg. (The conclusion: the more expensive jamón actually was noticeably better, being sweeter and not as salty.)

That nutella to peanut butter ratio 😮 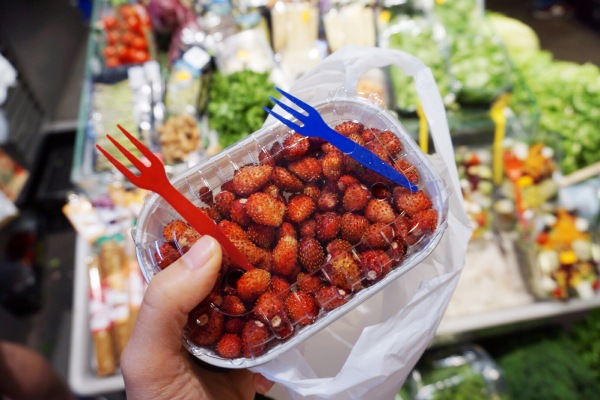 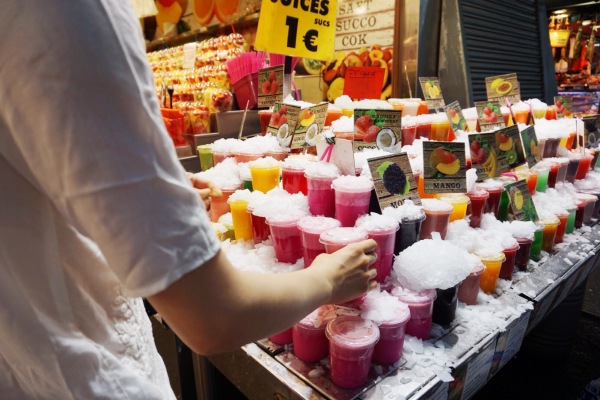 With the sky looking rather gray, this trip to the market was our final sight-seeing activity for the day and our last in Barcelona!

One last look at the Casa Batlló on our walk back to our hotel.

Before the sun was up, we were on our way to the airport. So although our trip was technically twelve days long, Day 12 was really just spent getting home, but it wasn’t without its highlights! At our layover in Lisbon, we seized the opportunity to munch on toasty egg tarts and on our flight from Lisbon to Miami, the flight was rather empty so the four of us got to spread out over ten seats. A poor baby cried nearly the entire 8-hour flight though, so even though there was plenty of leg room, I didn’t get any sleep, but gosh what a rough eight hours for the parents! A few movies and meals later, we were finally at home where I could tuck in for a quiet good night’s rest and dream of our next adventure abroad. 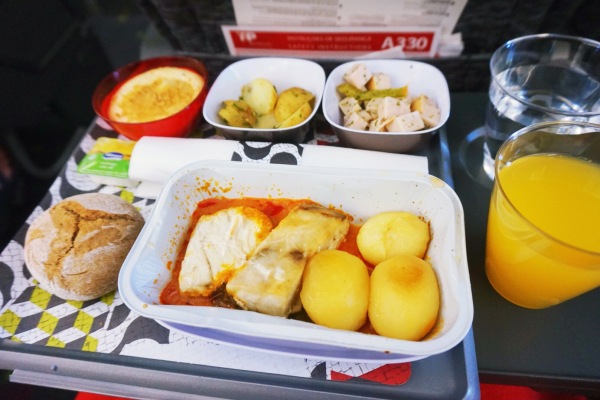 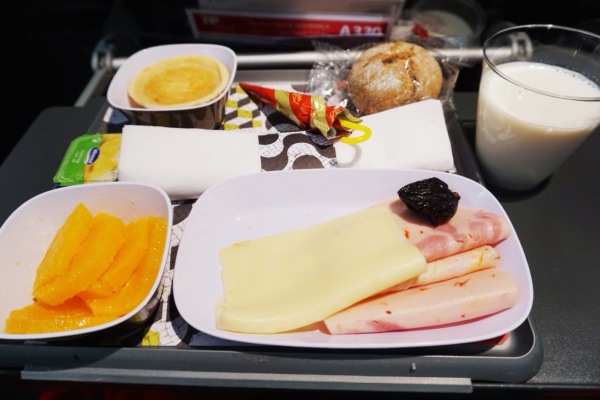