Today we were not only off to a new city but also a new country, Portugal! During our 12 days in Western Europe, this was the sole day in which we weren’t on Spanish soil. (Well technically we had layovers in Lisbon but disregarding that…) While egg tarts were the first thing on my mind, I’d have to wait till the afternoon to indulge; Cabo da Roca, continental Europe’s western most point, was on the top of the itinerary. I really wasn’t too excited to visit a place whose selling point was being a geographical extremity, but this place actually turned out to be one of my most memorable.

While approaching Cabo da Roca, our tour guide warned us against going beyond the wooden fences even though we’d see other people doing so. This warning was prompted by a tragic story that made the national news in which a couple fell to their deaths while trying to take a selfie at the edge of a cliff. Their two young kids were watching. That’s not the kind of story you ever want to hear, but it sure made me heed his warning. Our tour guide also cautioned us that it would be chilly and windy, and while I heard his words, I was still surprised when I stepped off the bus.

It was indeed on the chilly side but oh my the wind! At school at Penn, there’s a wind tunnel that gets super gusty, but this was like a constantly active Penn wind tunnel. I could actually feel the wind pushing me off balance at its strongest.

The shear wind force was one of the factors that made this place so memorable but more contributing was the shear beauty of the natural landscape. Despite the harsh conditions, the area was covered with colorful, perfectly adapted plant life to contrast the steep, rugged cliffs and churning, blue waters below.

While this location was all about natural beauty, our second stop of the day was all about man-made beauty in Portugal’s capital city of Lisbon.  The area along the Tagus River was concentrated with monuments, including the Tower of Belém, Discoveries Monument, 25th of April Bridge (a copy cat of the Golden Gate Bridge), and Cristo Rei (Christ the King statue second in size to the one in Rio). On the other side of the street we could see the Jerónimos Monastery and a short walk from there further towards the inside of the city was the stop for which I had been eagerly waiting in anticipation. 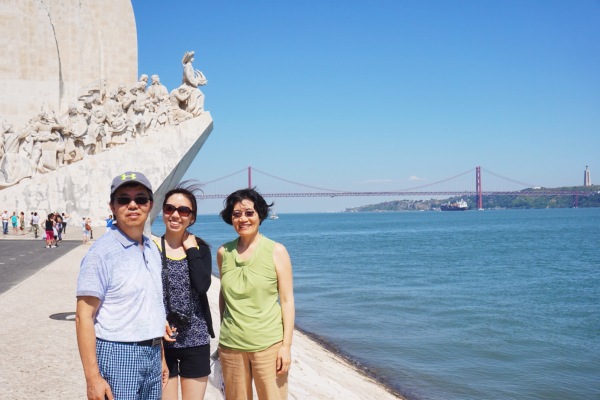 From left to right, the Discoveries Monument, 25th of April Bridge, and Cristo Rei all in one shot!

Normally, our tour guide only gave recommendations when it came to food, but today’s agenda specifically included a visit to Pastéis de Belém, the famed birthplace of the pastel de nata or Portugese egg tart. Crystal dedicated an entire post to them here, so I won’t go on too much but to say that we ordered four each, immediately downing three each while they were still fresh and warm. (The others we ate for breakfast the next day, although they were sadly on the soggy side.) These egg tarts were different from the ones I was used to in the States and even those ones I remember from Macau, a former Portuguese colony, in that the custard was sweeter and softer while the crust instead of being flaky like pie crust or airy like puff pastry, was crisp, even crackly. 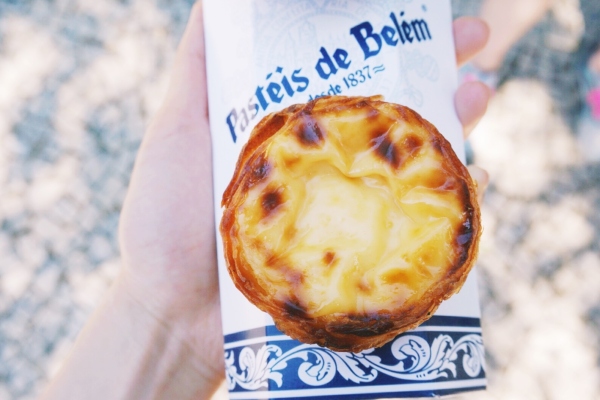 On the savory side, we learned that codfish “bacalhau” was a local specialty and so while strolling downtown seized the opportunity to try a pastel de bacalhau at the 1904 establishment Casa Portuguesa do Pastel de Bacalhau. I hadn’t heard of this specific pastry before but given that this salted cod “mountain cheese”-filled fritter was their solely featured item and that the store was even equipped with a fancy demonstration window, it sure seemed like a legit place to try my first one.

Also while in this pedestrian shopping area, Crystal bought her first souvenir of the trip, a colorful, ceramic plate, and to gift to our brother and sister-in-law, we bought a few mini bottles of port wine, another Portuguese specialty, from a little shop founded in 1919. And of course, studded between the many souvenir shops were almost equally as many bakeries with their tempting, well-stocked window displays.

Choosing a dinner spot was especially difficult tonight, despite being solicited by numerous restaurants lining the streets. After walking back and forth a few times, Crystal and Mom decided to go to a salad place while Dad and I went for one of the sidewalk seafood restaurants. As soon as we sat down, a server came by promptly to drop off a basket of bread, some spreads, and a small plate of cheese at our table. Little did we know, these assumed-to-be-complimentary items would actually cost us 10+ €. It would have been nice of the server to mention this, but I suppose considering their customers are mainly tourists, they’re not worried about trying to get repeat customers. Although we felt a little cheated, at least the soup and assorted fish platter we ordered were pretty tasty.

All in all, today’s activities were a well-balanced snippet of Portugal’s natural, man-made, and culinary delights.