The main reason why I made sure Portugal was on the itinerary of our otherwise Spanish travels? Egg tarts. My infatuation was ignited in a busy cafe in Macau the summer after my senior year of high school and grew and grew with each meal at believe it or not… KFC!

KFC in China that is. In fact, KFCs around the world are quite different from the ones here in the US as one look at some of the menu items offered in China shows. But don’t be fooled because even if the items are called the same by name, you’ll probably be in for a surprise (something I learned after ordering the mashed potatoes).

Those ever so memorable egg tarts from Macau

Anyway, I’ve tried for years now to find somewhere in the States that makes egg tarts as good as the ones I had in Macau and the mainland, but still to no avail. However, my recent trip to Portugal – afterall the motherland of Portugese egg tarts – confirmed my previous suspect as their common downfall: temperature. Unlike some treats like croissants and chocolate chip cookies that can be enjoyed at room temperature, egg tarts have a very short window for consumption. In the busy cafe in Macau, the morning rush ensured that egg tarts were relayed to us customers almost as soon as they left the oven! Similarly at KFC, the lunch crowd made it so that these golden medallions were always fresh. At Pastéis de Belém in Lisbon, the fast-moving, yet constantly refilled line of tourists made hot orders the norm, while shops at Lisbon’s airport also delivered on this front by keeping their egg tarts in temperature controlled cases.

Only one of the best sights any airport could offer

Since bakeries in Chinatown don’t seem to pay the same attention to temperature, time and time again, I’ve been tempted to try my hand at them. Although the custard filling seems easy enough, the crispy, flaky shell has always baffled and intimidated me. An early attempt at a puff pastry-type shell resulted in the pastry puffing up in the oven so much that the custard filling was pushed up and out of the shell, spilling over onto the baking sheet! Another attempt to get the blackened spots characteristic of Portuguese egg tarts (which also sets them apart from Hong Kong egg tarts) resulted in smoke pluming from my oven due to the unusually high baking temperature required of that recipe. While I haven’t had the best luck baking egg tarts, a recipe found in the magazine my tour guide gave me while our bus was driving away from Lisbon bound for Madrid made me excited to give making Portuguese egg tarts another try. So here goes! Third time’s the charm?

I was pleasantly surprised by the outcome! Although they didn’t look anything like the magazine led on, these egg tarts made up for that in flavor. I usually always halve the sugar in recipes, but to do this recipe full justice I decided to follow it exactly. While it hit just the right note in terms of the sweetness of the custard, the same could not be said for the texture of the pastry. Built from a whopping stick of butter, the pastry, while intoxicatingly buttery and crisp, was really missing that characteristic “puff” or layered quality. All in all, I’d say the third time was the most charming and while they ended up more like Hong Kong egg tarts that didn’t stop the Yan family from gobbling them up hot and fast! 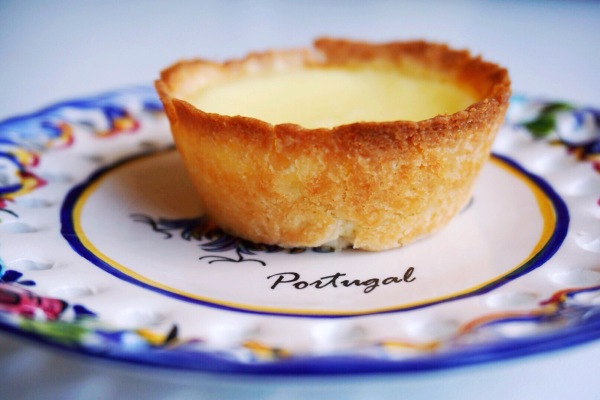