Leaving from Málaga, it was only a short, half-hour ride to our first stop of the day, Mijas. Touted by our tour guide as a beautiful, white-washed village that could rival those in Santorini, Mijas turned out to be underwhelming. Looking back at the photos, I think Mijas was actually a photogenic place, but having been awed by the views of the Albayzín district (whose buildings are also mostly painted white) and Málaga the day before and having spotted other white-washed villages while on the road, Mijas just seemed like “another one of those” at the time.

We arrived relatively early in the morning and had the place mostly to ourselves – although quite a few tour buses pulled in by the time we were leaving. With about an hour and a half to spend in the quaint town, we walked through the streets, making a small loop. Towards the beginning of the loop was one of my favorite sights, a simple set of stairs that on one side was tunneled by a tall white wall with bright blue flower pots. About midway through the loop, there was a small bull fighting arena and spiral metal staircase that vibrated with each step you took and led you to a platform with a slightly higher view. 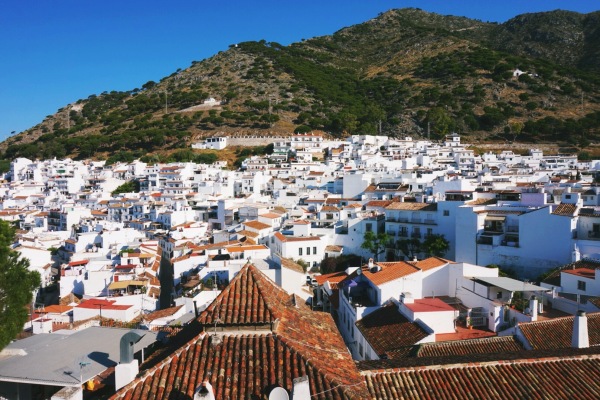 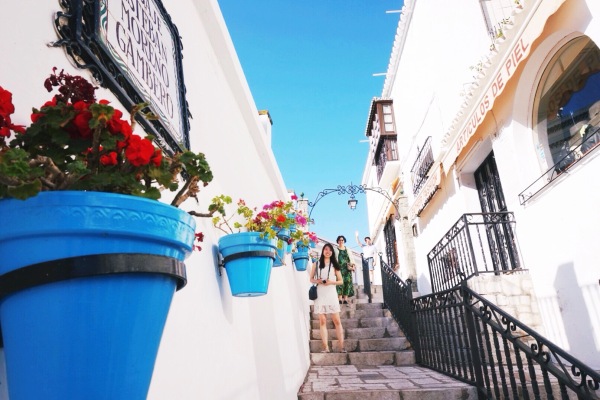 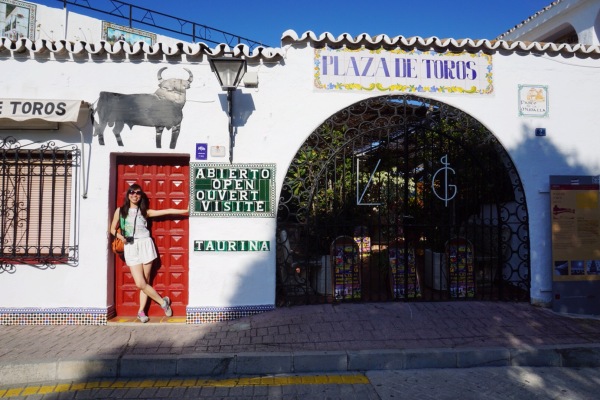 Towards the end of the loop, there was a tiny church within a cave. The story goes that when invading Moors caused inhabitants of the town to flee, they hid a statue of Mary in the cave to protect it since they couldn’t afford to take it with them. Many years later, two boys were playing soccer, and one of the boys accidentally kicked the ball into the cave. When he went to retrieve the ball, he also discovered the statue, and when the later townspeople heard of the news, they agreed it was fitting to transform the cave into a church. 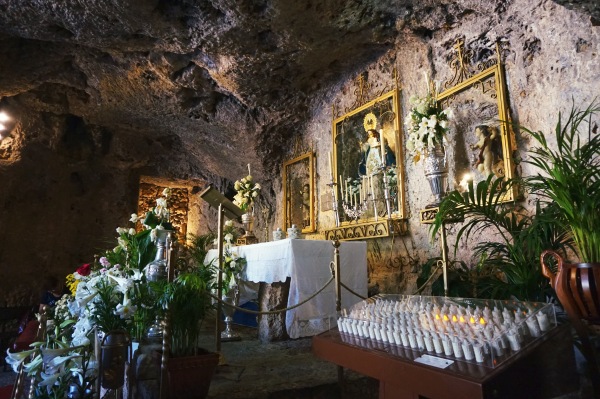 The very end/beginning of our loop was where the information center and donkeys stalls were. While we were there, three young boys were getting fitted for a donkey ride through the streets. There were donkey-pulled carts for hire, too. 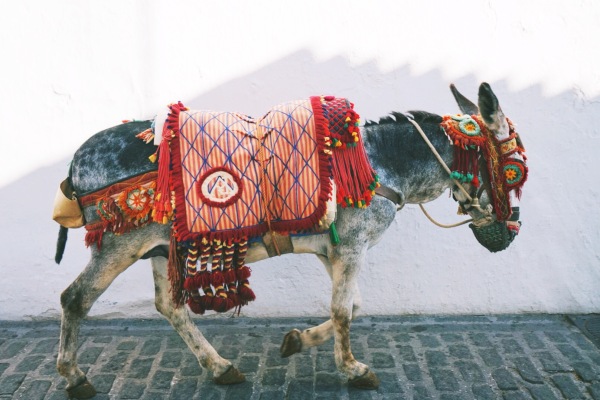 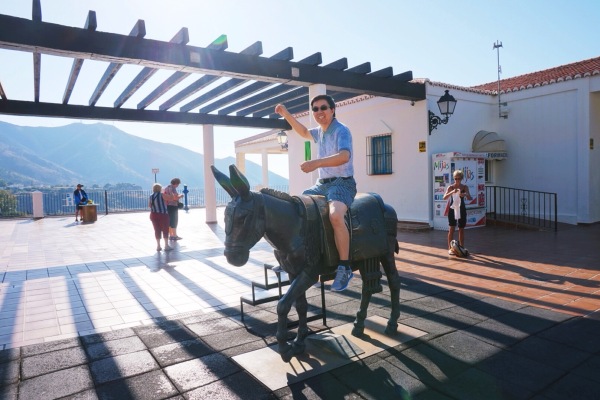 Next we were off to Seville, but before arriving, we stopped at a rest stop for lunch. While the sandwiches and watery salads were sub-par, the fresh squeezed OJ was way above. As fresh as it gets, entire oranges were slid into a shoot and then sliced and pressed through revolving spheres. (We would see a lot more of these juicers during the rest of our trip.) Once back on the road, the roadside landscape transitioned from orange trees to sunflowers and olive trees. 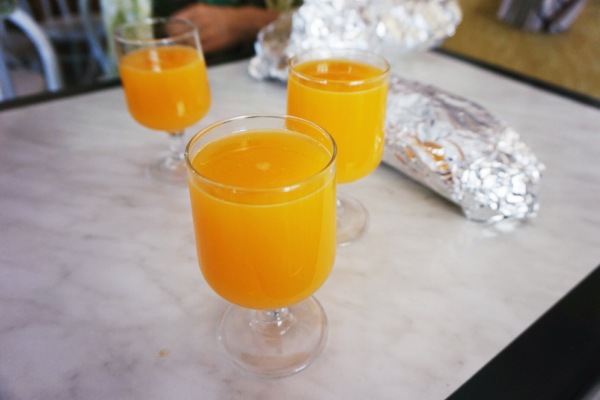 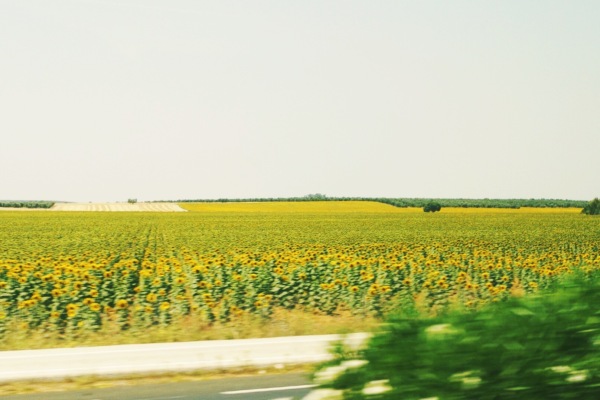 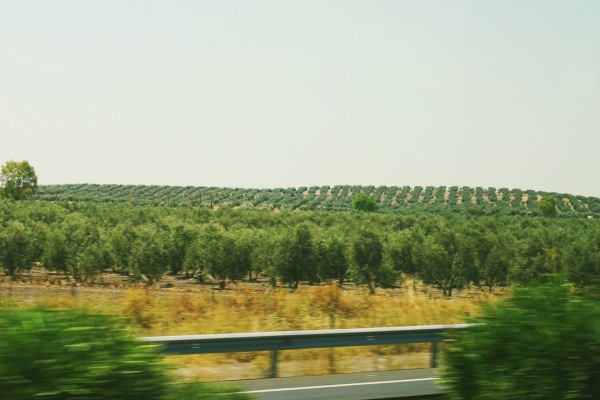 Up till our time in Seville, the summer heat had been pretty mild. Barcelona had been a comfortable 70’s to 80’s, but here in Seville, the sun was potent with the temperature peaking well past 100 degrees Fahrenheit. We moved through the wide-open part of the Plaza de España, which had been constructed for the 1929 World Fair, as fast as possible before seeking the protection of shade where we could better appreciate the impressive and monumental site. The strong sun didn’t stop a flock of sparrows from playfully zipping around though. 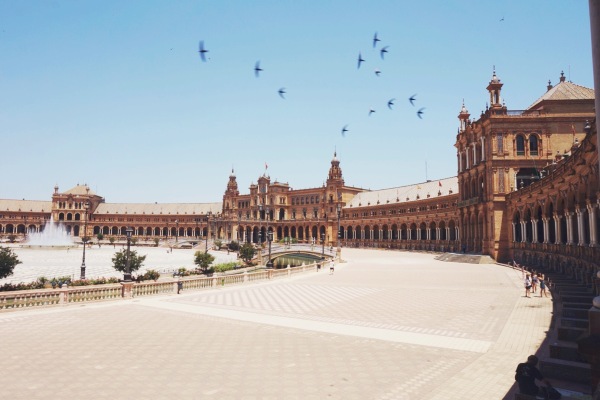 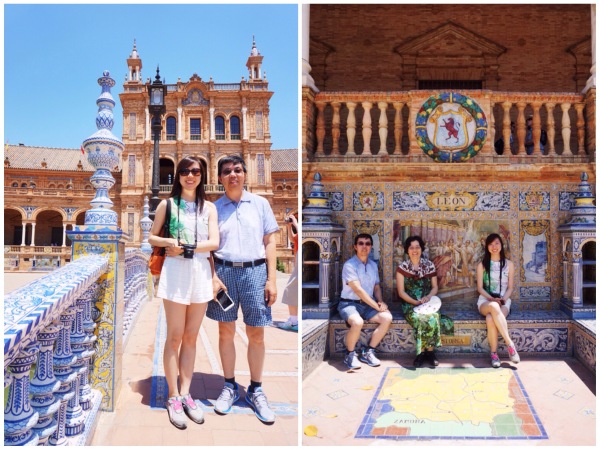 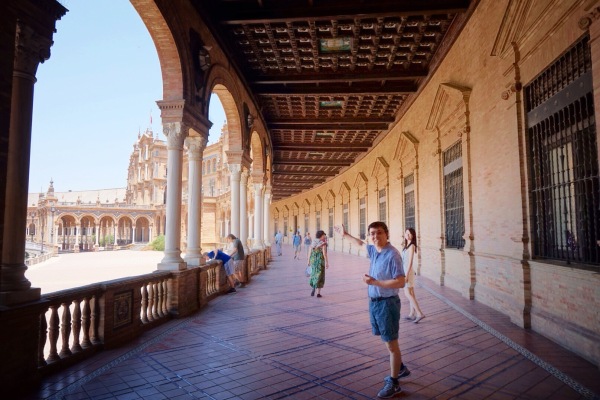 Next we went to the center of the city where there was the Seville Cathedral, a Moorish palace, and pedestrian shopping area. Since we weren’t too excited to visit another church and having visited the Alhambra just yesterday, we opted to do some shopping. Prompted by the heat, the first thing we bought was flower-shaped gelato from Amorino. Having chosen three flavors, mango, yogurt, and strawberry, we watched gleefully as our server skillfully added each of the variously colored “petals” to our cone. 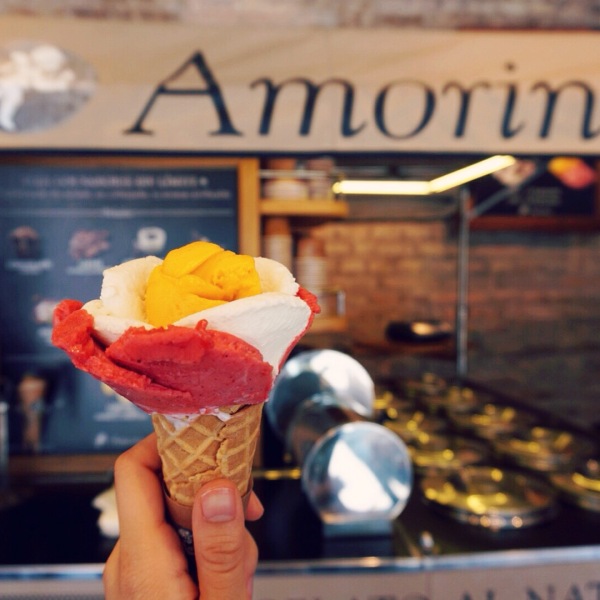 We looked around a few clothing stores as well as Spain’s main department store, El Corte Inglés, before heading to Starbucks, our tour group’s reconvening point, where we split a passion fruit mango yogurt smoothie. While we waited, a few of our tour mates came in carrying a bag of fresh fruit, and after getting directions from them, Crystal and Mom went to buy fresh fruit, too. They came back with two stuffed bags of grapes, oranges, peaches, nectarines, bananas, and loquats!

Our hotel for the night was rather special, being literally inside a soccer stadium. The soccer stadium had been built in anticipation of Seville hosting the Olympics; however, that never happened, so… Crystal and Mom had already bought their dinners at Starbucks, so just Dad and I ordered at the hotel restaurant, which came with this view. 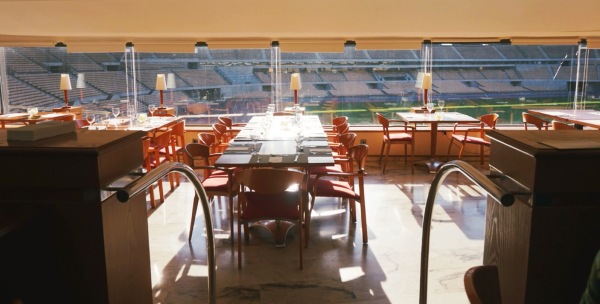 It was an unexpectedly unique dining experience to end this day and start the next. 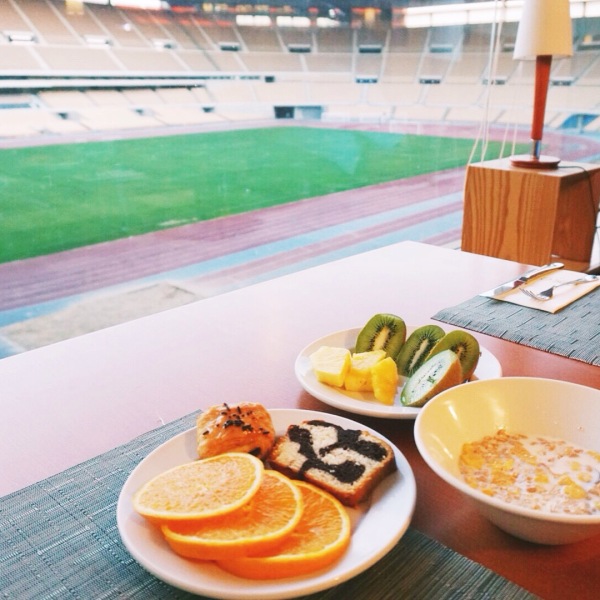