After two days in Orlando, we were off to the west coast city of Tampa. Having gone to Busch Gardens and toured the Yuengling brewery on our last visit exactly a year ago, this time we mainly explored downtown. High on the to-do list was to eat at Edison Food + Drink Lab. One look at their menu and one can see how their philosophy of product + technique + creativity2 is reflected in menu items like masala-grilled salmon with saffron vanilla uni foam or oysters with a yuzu kosho mignonette and liquid nitrogen kaffir lime. Itching to taste their inventive products made with molecular gastronomy techniques, we decided to go for lunch on our first day.

We arrived right when the restaurant opened, and not long after, many more parties came in as well, a good sign. And the food did not disappoint. To start, we ordered the Prosciutto di Parma Zeppole, the Avocado Leaf-Seared Yellowfin Tuna, and the Crispy Fish Tacos. The zeppole dish was one of my favorites of the entire meal as the donuts were still warm and the melon provided the perfect cool and refreshing sweetness to balance the saltiness of the dried prosciutto.

For our entrees, Crystal and I shared the Spicy Jamaican-Fried Organic Chicken while our parents split the New Bedford Sea Scallops. The former was the second of my favorites of the meal; the waffle was packed with caramelized banana flavor, the sweetness of which was cut by the vinegar-taste of the collard greens and chayote. Plus, the chicken was sizable, crispy, and piping hot. 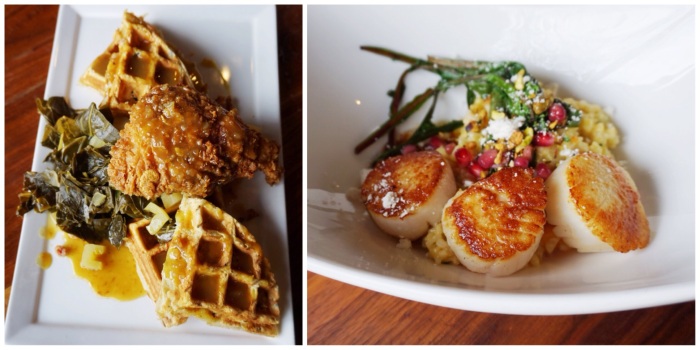 For dessert, we tried the Baked Apple + Almond Tart, although the carrot ice cream was also tempting. While the more exotic flavors like star anise and ginger didn’t really come through, it was still a tasty dessert and served its purpose of rounding out the meal.

With a solid and superb meal behind us, we took a daytime walk around the downtown waterfront before retreating to the hotel for a break until the late afternoon, after the sun was no longer so strong. We then ventured out towards Bamboozle Café, our dinner spot, which was a little under a mile from our hotel. But since it was still a bit early for dinner, we walked leisurely through the city, passing by the café and happening upon a food truck event before looping back around. 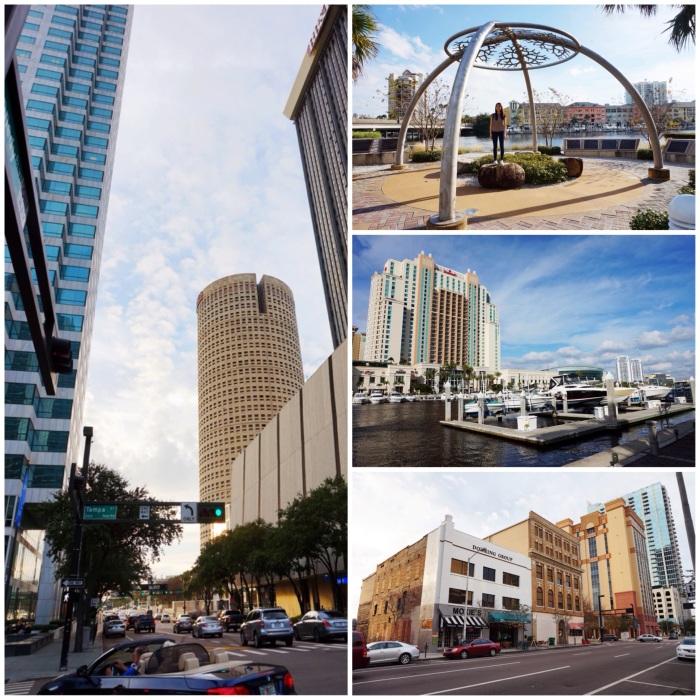 Crystal had chosen Bamboozle Café since their selection of healthy Vietnamese fare would be a reprieve from all the heavier restaurant foods we’d been eating on the trip. Frankly, I was skeptical to eat at a restaurant with “bamboozle” in its name, but it made sense after reading the owner’s explanation (“I came up with Bamboozle because I wanted to playfully bamboozle you into healthy eating.”) which I later found on their website. 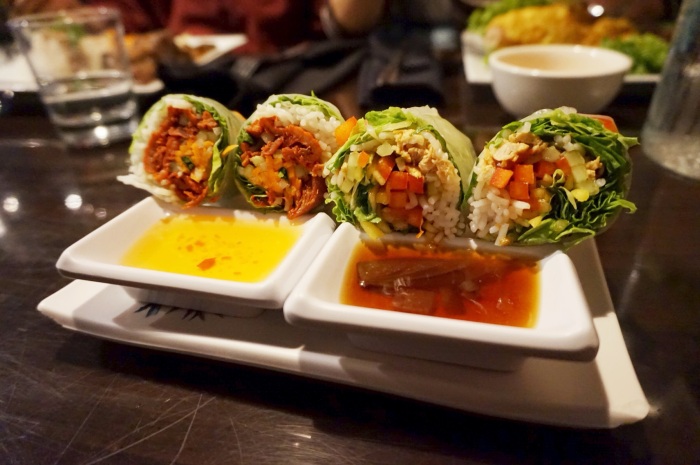 This meal was followed by another walk around the waterfront back towards the hotel, the views being transformed under the cover of night.

And since we didn’t have dessert at Bamboozle Café, we stopped for gelato at Jackson’s, the conclusion to Day 1 in Tampa.

Our second day was really just the morning spent in Tampa because being Christmas Eve, we wanted to get home early. So although it wasn’t even 9 am yet, we drove to Brocato’s Sandwich Shop for “lunch.” A “Tampa tradition since 1948,” this family-run business is well-known for their deviled crabs and Cuban sandwich (the signature sandwich of Tampa, having supposedly originated there). Crystal and I ordered a 12” to share, assuming the portions would be like Subway’s, but boy were we wrong. Stuffed with meat, this was one hefty sandwich! (We still finished our halves though :P) 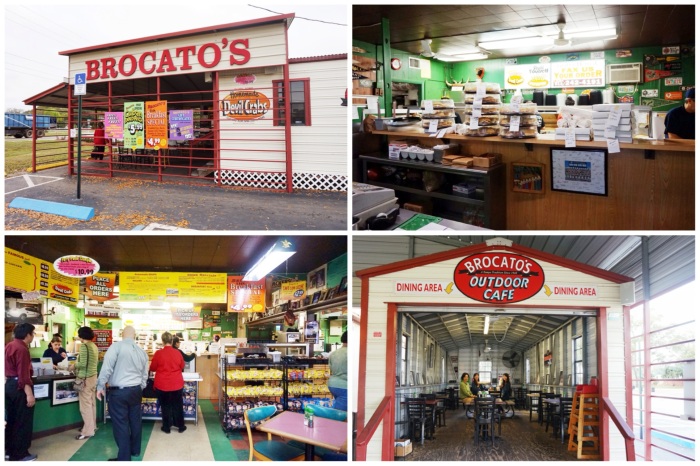 Having had lunch for breakfast, we were ready for the three-hour drive home.