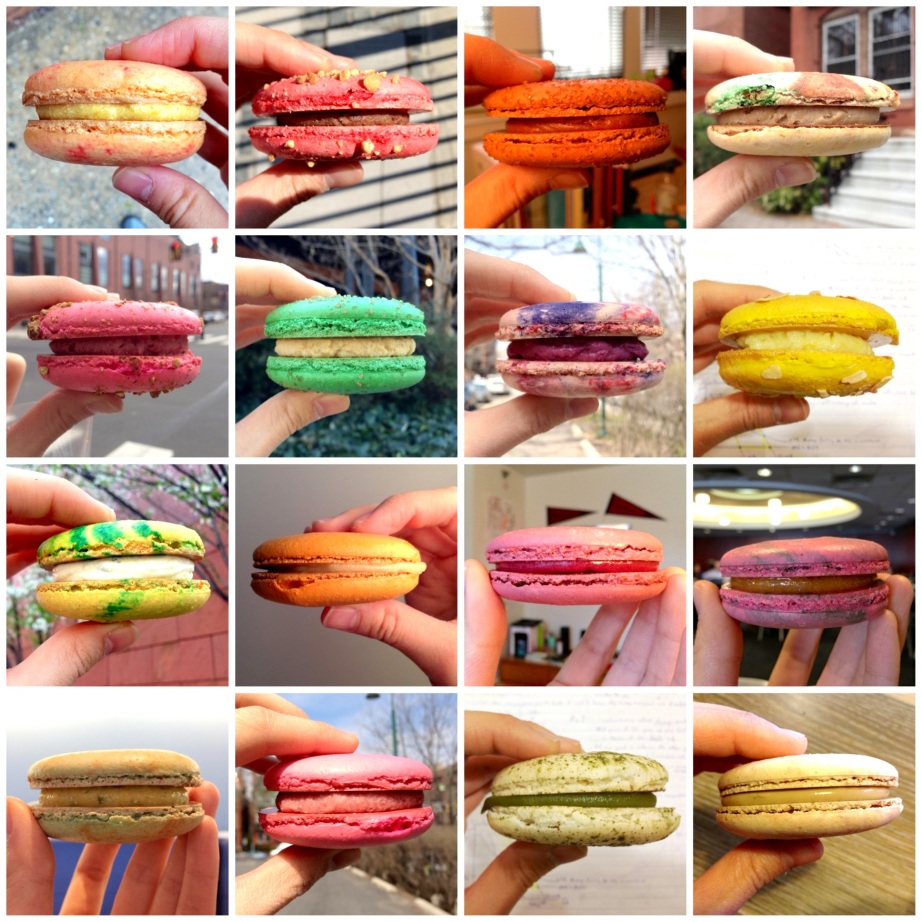 College itself is a time for self-discovery, but even luckier for us Penn is in Philadelphia! And with that bonus, we underwent what would become a self-defining discovery. We became macaron afficianados. Simply put, it was love at first bite.

Now just in case you were thinking of this guy (a coconut macaroon): 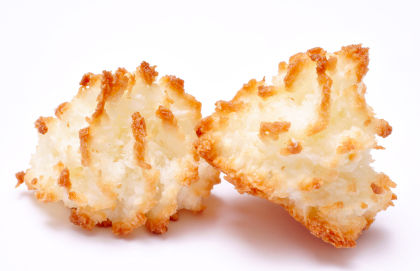 Nearly every day between classes, we find ourselves on “the macaron run.” Some people like their sugar in their coffee, we happen to like it in our macarons. Although Penn students also have Gia Pronto and now recently Audabon Bakeshop as on campus options for their macaron attainment, to us Sugar Philly still ranks supreme for these reasons: 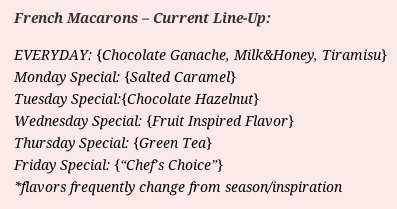 Wait, isn’t that suppose to be a negative?! Not to those of us who frequently stare down a menu in indecision. Few flavors make deciding easy; just get whatever’s new! From Italian Chocolate Chip to Spicy Mexican Chocolate to Spiced Apricot Basil to Mixed Berry Yogurt to Meyer Lemon Pomegranate to even PB&J, the surprise flavor of the day has yet to sour our sweet tooth. Well, I suppose there was that pistachio cherry root beer one… Then again we don’t like root beer to begin with… Anyway, moving on to reason #2.

2)    Flavorful flavors. Nothing’s more annoying than getting five different flavors and having them all taste the same. With flavors as distinct as Tiramisu and Green Tea, this is guaranteed not to be a problem! (Plus, the flavors change with the seasons.)

3)    From a foodtruck. Their motto is “high end dessert served street side.” ‘Nuff said.

4)    FAT (in size). The standard macaron is 1.5 inches in diameter, but Sugar Philly also gives their customers a bigger option that’s almost twice the size! The bigger size also makes these French cookies chewier than their bite-sized counterparts and we like our cookies chewy! 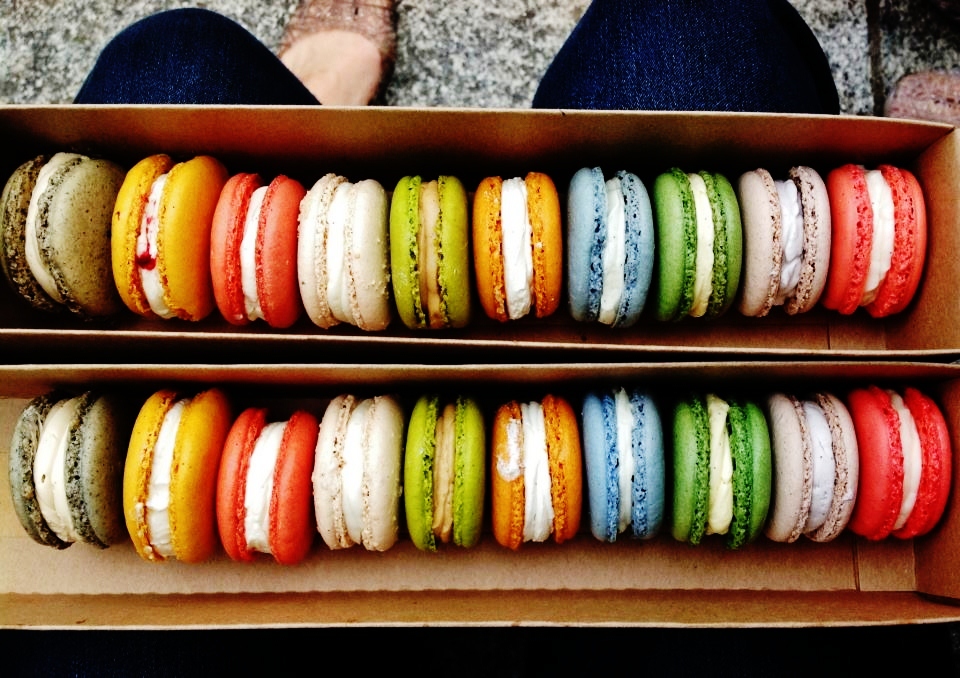 After becoming well rehearsed in the task of macaron consumption, we became eager to not only spread macaron fever to our friends back home, but also to try our hand at these dainty French cookies. So over winter break, we along with our friend Angela made our first attempt at macaron making. Inspired by the holiday season the three of us agreed upon the flavors eggnog marshmallow, white chocolate peppermint, and spiced mocha chocolate ganache. But it wouldn’t be until a few attempts later that we came to the mantra of macaron making: be patient.

First, be patient during the egg beating stage. The egg whites should be beaten to stiff peaks. In other words, don’t settle for frothy eggs like we did or you’ll end up with airy meringues. 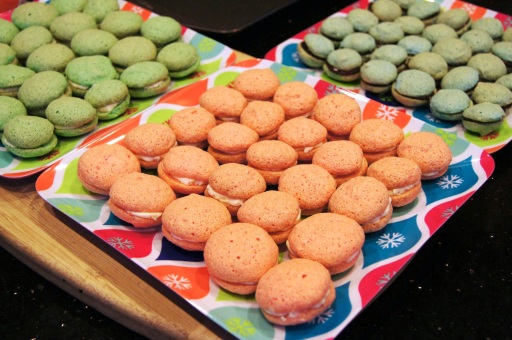 Second, be patient as your macaron shell batter rests. After piping your batter onto parchment paper, most recipies will tell you to wait for a film layer to form on top before baking. You should be able to touch the batter without it sticking to your finger. Living in humid South Florida, we had to wait over 40 minutes for this step. 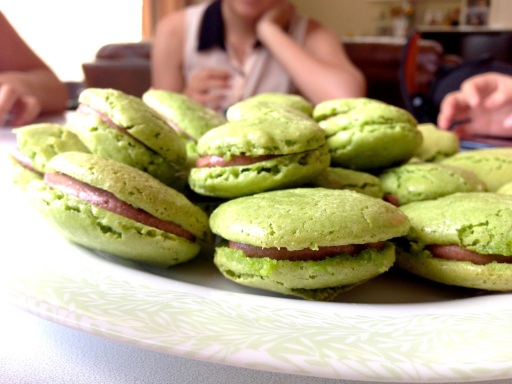 Third, be patient as they bake. Determining baking time can be very tricky, but if you don’t let them bake long enough you’ll end up having to scrape them off the sheet.

But if you’re patient enough, you will end up with… 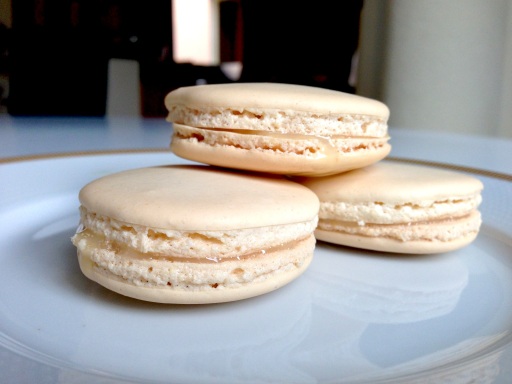 Like the old adage says, it pays to be patient.  And in the macaron world, your patience will be rewarded with smooth shells (characteristic feet included) that’ll make you look like a pro.

P.S. The macaron flavor of attempt #3 was actually inspired by our visit to Paris this summer. Philly may be for foodies, but Paris is for artisans. We tried pastries from the famed Lauduree, Pierre Herme, and Sadaharu Aoki. Hey, we even gave the McDonald’s macarons a try (and they were pretty tasty)! But when all was said and eaten, we crowned our favorite flavor olive oil by Pierre Herme. 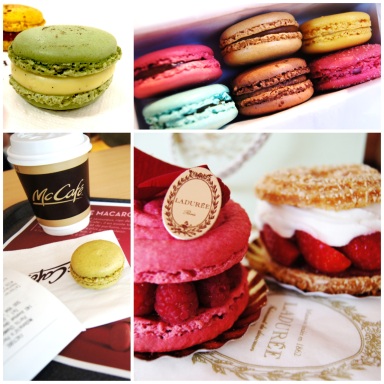 3 thoughts on “Macarons: a story of self-discovery (from ignorance to bliss)”